This photograph, taken from the back of the cabin-cruiser Heatherbelle or its predecessor, shows that home-made water skis are okay. They were very light, not at all like the heavy ones they sold at Quins. (They now live on a shelf…..at the South Australian Maritime Museum.) Even if they were not the first water skis on the Port River, they were the first (and only?) home-made ones. After all, Grandpa had built the boat.. why not make the skis too?

I remember the first time we used them round the back of The River. We were impressed by the way Grandpa had bent the wood up. The foot fittings were crummy, but as experienced water skiers will know, whether they are complete and fit doesn’t really matter. Ours were plastic with rubber heels and tops. There was a plastic ratchet affair that supposedly enabled them to be adjusted. Our feet were too small anyway; we were children. It is probably possible to ski on almost anything. We did not know that to start with however and these light wood skis that Grandpa had made did not seem likely. When we advanced to single skiing Dad got the saw and cut the back corners off and fitted a metal fin underneath. Fine.

But that’s not the worst of it. At first Dad would throw a length of twine over the stern and tie it to a cleat. Then we got handles for the rope like other people (on TV) had. When two of us skied at once, one had to hang on to a hairy brown rope that stretched. We had to put the skis on on board the boat, standing on the transom and throw ourselves backwards over the stern. We didn’t like it. I preferred to dive or jump in and put the skis on but it is true that on days when the seas were up your skis could wash away a short distance and you’d have to swim to retrieve them. I never got used to falling backwards over the stern of the boat, holding a rope and wearing a pair of water skis. 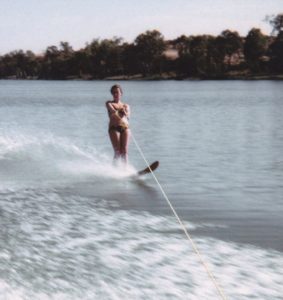 We would ski for miles and miles, along the coast or along the Port River. The featured image was taken east of the Cattle Station on Torrens Island. You can’t get along there these days. The Cattle Station poplars can be seen in the background. I wonder whether the water around there is still teeming with skates. Once or twice the tide was so low one could simply step off ones skis on to the warm and sandy bottom. I think it is Dad and Chris on the skis. I must have been driving the boat. 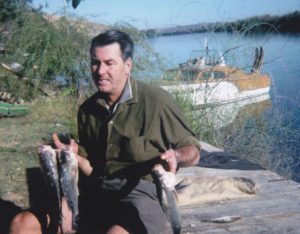 Harry Perry with his catch, skis in the stern of the boat. 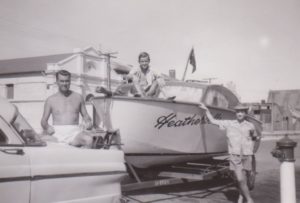