Torrens Island Quarantine Station has stood in splendid isolation since the 1880s … until we provided tours as part of About Time: South Australia’s History Festival.

The Quarantine Station was built in 1879 with facilities for 56 men and women, a twelve-bed isolation hospital and a ‘dead house.’ It was used through the twentieth century and our files hold a letter from a retired quarantine inspector describing events in the 1950s.

When the Strathaird arrived at Fremantle in August 1954 eight cases of small pox were found on board and the whole ship was quarantined including 1,200 passengers and 800 crew. No facility could hold that number of people so passengers were taken to their destinations to go into quarantine. 173 were dropped at Adelaide’s Outer Harbor and ferried to Torrens Island.

Each passenger was given a blue calico bag and told to place a change of underclothes in it. Those clothes were then taken to a steam chamber to be disinfected, ready for wear. The passengers were taken to a bathing block to wash in diluted carbolic acid.

You can still see the bathing block and the steam disinfection chamber. The bathing block was built with separate entrances and separate amenities for first and second class passengers. The arrangement of the buildings led passengers from the jetty through a clinical process, much like a production line. At the other end there is hostel accommodation surrounded by a park for those passengers who are well. For others there is an isolation hospital. There is also a corrugated iron morgue and graves with numbered markers.

The tours attracted many people who had a personal association with the Quarantine Station. Some were descended from people who worked there or were patients held in quarantine. However, one of the best accounts was a memory of a fourteen-year-old girl swimming across the Port River from Largs simply for the thrill of sneaking past the guards and looking around the Quarantine Station – a brave heart and a great swimmer. 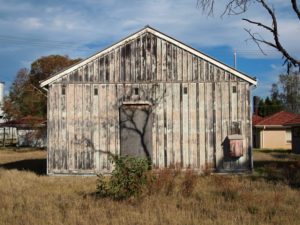