At thirteen, many of us would have been looking for a bit of freedom from our parents, and perhaps a little adventure. Taking off on a bike for most of the day with little or no forewarning, school camping trips or travelling alone on an interstate bus to visit friends or family are common experiences of early teenage independence. How about rounding Cape Horn in a square-rigger? Probably not, although apparently, no one mentioned this to Alan Rogerson who sailed in the Pamir at the age of thirteen, or ‘Moses’ who sailed on the 1932 voyage of Parma. Alan Rogerson, Frank Gardiner and Stanley Bliss on the ‘Pamir’, 1949

Allan Villiers who owned a share in the Parma described Moses as very childlike with an unbroken voice. He claimed to be 15 and was suspected of being 12. Villiers later learned there was more to Moses than his innocent appearance suggested, he had been to sea before with German smugglers. Moses and his Baltic shipmates were apprehended by the Swedish coast guard and imprisoned.

Rogerson and Moses were among the youngest to sail Windjammers although most ships sailed with boy apprentices somewhere between 15 and 17. Aged 17, David Davy’s parents gave him a letter of permission to sail on Viking in 1948, a requirement for South Australian’s under the age of 21. 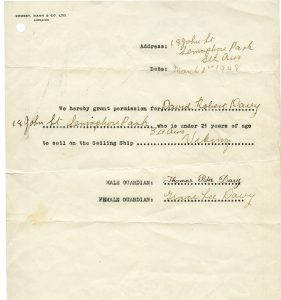 As the youngest and least experienced crew, apprentices did the most menial and least desirable jobs on the ship. Of course, they were learning to be seafarers too and had to learn the names of all the yards, sails and ropes used to sail the ship. Apprentices would climb the rigging shadowing more experienced sailors, carrying their gear.

Generally, windjammer crews were very young with most of the crew aged about 18 years. The mates and captains were older, usually about 30 – 40 years old. Young Alanders and Australians joined windjammers to gain experience in sail. The Aland Government required time in a large sailing ship before a sailor could qualify for a master’s certificate. Many of the young South Australian’s including Rogerson and Davy went on to have a career at sea in steam or the coastal ketch trade.