Just below the north-west end of Port Adelaide’s Birkenhead Bridge is an empty inlet, without boats or any sign of human activity.  Apart from the derelict buildings at one end of the basin, the area is now not dissimilar to the mudflats that existed there during early development of the area.  Yet, for almost 100 years, this deserted corner of the harbour was alive with the boating activities of The Port Adelaide Sailing Club.

Yachting in South Australian waters in the 1890s was essentially considered a rich man’s sport that was enjoyed mainly by members of the Royal Yacht Squadron.  But, at the same time, there was a growing number of yachties who were unable to join through reasons of finance or social position.

This situation led to a meeting of a group of local sailors in 1891 in the Birkenhead Tavern.  Their purpose was to discus the situation and find a solution.  The gathering was unanimous in its decision that they wanted a club of their own.

However, it was to be another six years before their dream would become a reality and another twelve years before the club had a meeting hall.  Generally considered a ‘working man’s club’, the Port Adelaide Sailing Club was first established in Birkenhead Street, Port Adelaide.  Later, when a plot of land previously occupied by Alfred Pickhaver’s Boatyard was leased, the club moved toJenkins Streetin 1919. 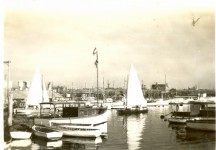 On 7th March, 1925, a new clubshed was opened alongside the mooring basin. In 1930, an upstairs room was added to the shed structure.

During the years pre and post the First World War, the club raced a fleet of 14-Footers.  However, by the time of the club’s 75th Anniversary Regatta, vessels racing at the club had grown to Sharpies, Fireballs, Lazy-E’s, Rainbows, Herons, Holdfast Trainers and TS-16’s.

After the turn of the century, an expanding residential development became a major threat to the club.  In addition, the construction of the two new Port River Expressway bridges meant that there were now three bridges, including the oldBirkenheadBridge, that landlocked the club.

So, after a 100-year history of existence in Port Adelaide, in 2007 the PASC moved to its current brand new marina down river atSnowdon’s Beach.  And now, back at Birkenhead, things around the club’s old inlet don’t seem too different to how they may have appeared way back at the beginning of European settlement in Port Adelaide.