Lookouts were doubled to warn of the threat of icebergs, safety nets were rigged around the deck and lifelines used. Helmsmen, wrestling with the ships wheels were lashed to the poop deck so waves crashing across the stern would not wash them overboard.

Sailing toward Cape Horn on Moshulu in 1936, Harry Andrewartha wrote in his diary that he had been wet for 48 hours and that water sloshed around the forecastle (crews quarters). Harry was swept off his feet by a wave and was lucky to escape with only a sprained ankle. 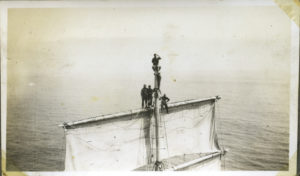 The young journalist Ronald Gregory Walker, sailing on the Grace Harwar in 1929, was not so lucky. He was struck by a falling yard, while freeing sails frozen in place and died instantly. His companion, Alan Villiers wrote about the lasting effects on the crew, especially the second mate, who felt responsible for Walkers death and was driven mad by the guilt.

Despite the hardships, Australian recruits nostalgically recalled their time under sail, forming the Australian Cape Horner’s association in 1959. A Cape Horner is a sailor who has rounded Cape Horn in a sailing vessel. Cape Horners were divided into three ranks: those who had captained a sailing vessel were ‘Albatrosses’, those who served on a sailing ship and later captained a motor vessel were ‘Mollyhawks’, while cooks, stewards and passengers were ‘Cape Pigeons’. 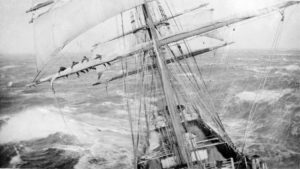 The windjammer ‘Garthsnaid’ off of Cape Horn. Image courtesy of State Library of Queensland.