When the South Australian Maritime Museum received a donation of various personal possessions that previously belonged to a naval officer who had served in South Australia’s colonial gunboat, HMCS Protector, there was a further unexpected windfall.

A closer look at one of the items revealed there was more to this collection of nautical objects than first met the eye.  The officer in question, Edwin Argent, was the ship’s Chief Gunner at the time of Protector’s voyage to China in 1900 to assist an international force in suppressing the Boxer Rebellion.  Argent’s ledger, used to record armament stores as well as neatly written descriptions of the duties and responsibilities of the vessel’s personnel, was in itself a wonderful acquisition. Yet, when the book was turned upside down and read from the back, it revealed to museum curators eight pages of an unintentionally concealed ‘rough diary’, in which Argent described how he personally saw Protector’s voyage from South Australia to China and its involvement in operations whilst there. 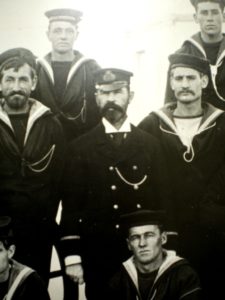 Museum volunteer, Dave Rickard, was so excited about the rare find and its contribution to present knowledge of the historic voyage that he immediately set about transcribing Agent’s diary into a typed format so it could be more readily studied.  Dave soon found that the Chief Gunner’s private opinions gave a rare insight into a wide range of events surrounding the Boxer Rebellion.  It also provided an individual’s view and impressions of his ship and the reservists who manned it.  For example, upon reaching the Philippines he wrote,

“I formed a very high opinion of the men during this trip & believe from personal observation that for endurance, these men are equal to any in the world”.

Then, while crossing the South China Sea, he wrote of Protector,

“We got the fag end of a typhoon and for the size of the vessel, she behaved in a grand style; I would not wish to be in a better ship”.

This new find is a rare and valued addition to the many items in the SA Maritime Museum’s HMCS Protector Collection relating to South Australia’s major warship of the colonial and early Federation era, particularly its participation in the Boxer Rebellion.

But, confounding to Dave was the reason for the diary abruptly ending at a critical stage when the ship was still on operations under the command of the British Admiralty.  Yet, Argent did make it clear right from the outset that the document was only a ‘rough’ diary.  So perhaps he transferred these particular jottings, and then continued the narrative in a more formal diary elsewhere?  Sadly, the question relating to the whereabouts of any fully completed diary, if it exists, remains unanswered.  Maybe, sometime in the future, an old copy might still come to light?  To be realistic though, any complete summary of the voyage as Argent saw it is probably, regrettably, lost forever.

Dave for one certainly hopes this will not turn out be the case.