As a land that has witnessed the journeys of explorers for the past 500 years, Australia has also been home to some of their shocking ends. The Australian coast is dotted with shipwrecks, all of which comprise of tales of difficulty, survival, fear and sometimes of hope. These shipwrecks leave behind not only the story behind its sinking but also the many cargo and objects that were being traded or delivered at that time. The Maritime Museum now houses some of these items; as a homage to the many ships that have met their untimely end – at the hands of the ocean.

The coast of South Australia is home to a large number of shipwrecks, some more prominent than others. Most of us know the story of the infamous Star of Greece who met its fate in July 1888 just 200 metres from the shore of Port Willunga or even the SS Admella who sank off the coast of Mt Gambier in 1859.

The Clan Ranald is another grizzly shipwreck tale. Considered one of the worst shipwrecks in South Australian history, the Clan Ranald was bound for South Africa with a crew of 64 people. Unfortunately, on the 31st of December 1909, rough seas and turbulent wind led to the vessel being sent towards the cliffs near Troubridge Hill, off the coast of the Yorke Peninsula. With their lifeboats smashed and no assistance from other ships (despite sending off distress rockets) the Clan Ranald capsized and sank about 700 metres from the shore. The crew members were left to fend for themselves; some being swallowed by the ocean as the ship sank while others perished from the steep cliffs and sharp rocks. The locals at Troubridge attempted to assist the rest of the surviving crew but were traumatized by the bodies that scattered the shoreline. 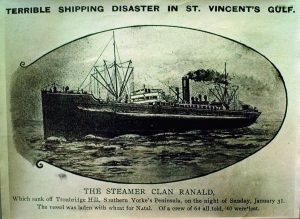 During this time, the White Australian Policy was at full force which meant that the surviving crew members who were of non-Caucasian descent were given the dictation test, which was rigged for failure. This resulted in the men being treated as illegal immigrants despite their recent tragedy. As such, they were quickly sent off the Melbourne to board a ship headed for Sri Lanka.

Several artefacts from the Clan Ranald can be seen as part of our Wrecked! Exhibit at the Maritime Museum today. Artefacts from other shipwrecks such as the SS Gothenburg, who wrecked off the coast of north Queensland, and the HMS Buffalo, who served the state of South Australia until its untimely end in 1840, can also be seen at the Museum as a reminder of the dark side of Australia’s maritime history.

There are approximately 850 shipwrecks that line the coast of South Australia. The artefacts within the Maritime Museum provide a way to get a closer look at these shipwrecks and the stories behind them, giving you the chance to further understand the diversity of our maritime history.

The Mosquito Fleet played a significant part in the development of South Australia, growing its economy and its relationships between the city and the country. Their purpose focused on trading with remote communities along the coast of South Australia, flitting between large ships and shallow waters. The Fleet linked town and country from the 19th Century to the late 1970s as they distributed cargo such as farm products, grain and minerals between city and rural ports.

Life on board the ketches

Crew members consisted of a captain and two seafarers as well as between two and four deckhands as most of the fleet were rigged as ketches and were quite small. Most deckhands were generally young boys who wanted a taste of the open ocean, assisting the captain on these smaller trips before searching for a chance to be aboard the bigger boats. Their small stature also meant they were economical; smaller boat meant smaller running costs!

Life on board the ketches involved often being at the mercy of the weather as well as the constant difficulty of manning a ship with a small crew. Some ketches ended up being swamped by large seas or wrecked on deserted shores. Despite its difficulties, the ketch trade was booming during the 19th Century. There were even ketch races held within the Port River; its earliest being in 1838 at the Regatta, 2 years after colonisation of the Adelaide area.

The Fall of the Mosquito Fleet

The Mosquito Fleet was at its greatest during the 1880s and 1890s when over 70 ketches and schooners were travelling between Port Adelaide and the smaller ports. Despite enduring the introduction of road, rail and steam transportation, it wasn’t until the 1950s that ketches slowly died out with only 30 boats working the Australian coast. The fleet officially ended in 1982 when the last two working ketches Nelcebee and Falie were officially retired.

These ketches were, and still are, romanticised, reminiscent on the notion of a life out on the open sea. Much like their larger counterparts, poetry and artworks were created of these ketches to ensure that their stories continued on through generations.